This Durham charter made a huge gain in student proficiency. How did it happen?

Home / This Durham charter made a huge gain in student proficiency. How did it happen?

This Durham charter made a huge gain in student proficiency. How did it happen? 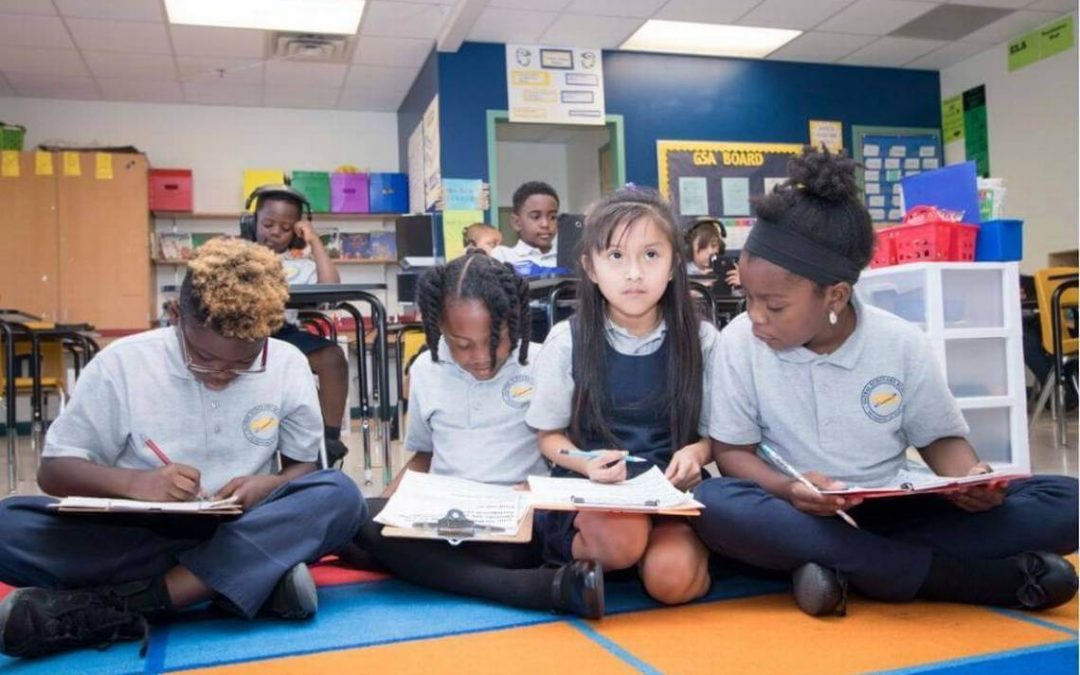 That’s how Jason Jowers, head of school at Global Scholars Academy, a Durham charter school, described the effort that netted a 17- percentage point gain on end-of-grade tests at the K-8 school on Dowd Street.

Global Scholars’ students increased the school’s proficiency score from 36 percent on the 2015-16 test to a 52.8 percent passing rate on the most recent round of state tests.

They also improved the letter grade the school received from the state from “D” to “C.”

“That was unacceptable,” Jowers said of the 36 percent proficiency rating and the “D” letter grade the school received last year.

When he arrived at Global Scholars in the summer of 2016 after stepping away from a principalship at Fayetteville Street Elementary School, Jowers set a goal of a 20 percentage point increase in proficiency among the school’s 215 students, and would have made it, he said, but for the fact the school’s eighth-graders underperformed on the state tests.

“It was audacious,” Jowers said of the goal. “I would have been laughed out of many school districts for setting such a goal. Nearly reaching it is a testament to the hard work of the staff and teachers and the buy-in from parents.”

Jowers has set a goal to increase proficiency by an additional 20 percentage points this year.

“That’s the goal for us and everybody understands that’s where we’ve got to be this year,” Jowers said.

“We’ve spent a lot of time on professional development and just figuring out what’s going to work for our school,” said Jowers, explaining that a “one-size-fits-all” approach to education simply does not work.

He also said the freedom allowed charter schools, which are public schools but are free of some of the red tape and rules that burden traditional public schools, has allowed him, for example, to explore new reading and math programs that are working for students at Global Scholars.

“I have the freedom to try just about anything just so long as it fits into the parameter of our charter,” Jowers said.

He said being a small school with only 215 students and only one class per grade has also helped, because he’s able to visit every class daily.

Jowers, a former Durham Public Schools Teacher of the Year and the 2015 N.C. Assistant Principal of the Year, was a DPS rising star when he left Fayetteville Street Elementary just weeks before the start of the 2016-17 school year to lead Global Scholars.

The decision to leave garnered attention when he took several teachers with him, leaving DPS scrambling to fill a leadership void and restock the teaching corps at Fayetteville Street.

At the time, Jowers said it was tough to pass up an opportunity to have more freedom and flexibility to educate children in a low-performing school using the kinds of creative approaches he believes will make a difference.

“It fails, it doesn’t work,” Jowers said then of traditional strategies to educate children in low-performing schools. “You have to think outside the box and allow educators to be innovative.”

James Johnson Jr., who co-founded Global Scholars with Kenneth Hammond, pastor at Union Baptist Church, said he felt “joy and elation” after learning about the school’s gains on state tests.

“It’s all about leadership and we have an excellent group of teachers,” said Johnson, a professor at UNC Chapel Hill’s Kenan-Flagler Business School. “He [Jowers] brought a talented group of teacher with him and that’s been big, that’s huge.”

Johnson said the climate at Global Scholars has changed dramatically since Jowers’ arrival. He said student learning has accelerated and Jowers has set high expectations.

Johnson said the year-round school doesn’t close during intercession and students who are struggling academically are expected to attend remedial programs designed to help them catch up.

“If a kid is not performing, we reach out to parents and tell them that the child needs to be here,” Johnson.

No time to waste

As a college professor at UNC, Johnson said he sees the best and brightest students North Carolina and the rest of the world have to offer.

“Those are who our kids are ultimately competing against,” Johnson said. “We can’t afford to miss a minute.”

Darius Bannerman, the parent of a Global Scholars eighth-grader, said he first started hearing about possible double-digit gains on the state test while attending meetings of the school’s Board of Directors.

“I was very impressed,” said Bannerman whose son enrolled at Global Scholars last year. “To achieve those kinds of gains in one year’s time, you jut never see that in schools. My wife and I was very pleased with the news.”

Bannerman attributed some of the success to the school’s extended-day program where students who are struggling in a subject can get the extra help they need and also take enrichment classes such as culinary arts and chess.

But he said the high expectations set by Jowers are key and infectious.


Send us a Message